Is the music world finally waking up? 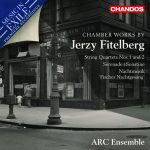 Not if it’s up to the big record companies. With them we are still condemned to Bachs, Beethovens and Wagners. Fortunately, smaller labels like Chandos still exist. A while ago they surprised us with a CD with chamber works by Paul Ben-Haim, now they know how to make me overjoyed with Jerzy Fitelberg.

While Ben-Haim’s name was still a little known here and there, Fitelberg’s name was not. At least not Jerzy’s,  because there are still enough old recordings of his father Grzegorz, who was a famous conductor.

Jerzy Fitelberg (1903 – 1951) was born in Warsaw and first studied with his father who had him play as a percussionist in the orchestra of the National Theatre in order to gain experience. From 1922 he studied composition with Franz Schreker in Berlin, among others. In 1927 he made a name for himself by re-orchestrating Sullivan’s Mikado for Erik Charell’s operetta-revue in the Grosses Schauspielhaus in Berlin. In 1933 he fled first to Paris and from there to New York.

Fitelberg was one of the favourite composers of Copland and Artur Rubinstein, among others. He himself described his compositional style as “full of the energy and high tension of Stravinski combined with the harmonic complexity of Hindemith and the colours of Milhaud’s French music. Plus the much-needed satire”.

Below an arrangement, made by Stefan Frenkel, of a Tango from Fitelberg’s opera ‘Der schlechgefesselte Prometheus’,played by Marleen Asberg (violophone) and Gerard Bouwhuis (piano) at a concert given by the Ebony Band, April 25, 2013 in Amsterdam,