A Heinrich Himmler Documentary, In His Own Words 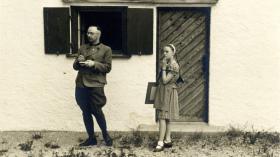 Nazi leader Heinrich Himmler and his daughter Gudrun. Vanessa Lapa, the granddaughter of Holocaust survivors, has made a documentary called <em>The Decent One</em>, based on Himmler’s letters to his wife and other personal documents.
Credit Realworks

The result is a documentary of unusual form. Lapa bases her fillm, called The Decent One, solely on these documents. There are no eyewitness accounts, no interviews with historians — nothing to create the often obligatory balanced view. Just archive footage, family photos and two main voices, those of Himmler and his wife as read by actors.

When Himmler’s letters recently surfaced in Israel, Lapa’s father purchased them with the express intention that his journalist daughter make a film, something Vanessa Lapa believes only her generation is able to do.

„For my parents it’s impossible to touch them. They are second generation,” she says. „They are too close and too tainted by what their parents went through.”

Lapa stored them in a bank vault in Tel Aviv, and, she said, not only for security reasons.

„The few times that the bank was closed and I kept them in my apartment overnight felt uncomfortable,” Lapa says.

Like her parents, Lapa was reluctant to read Himmler’s intimate thoughts but eventually decided to confront the often humdrum, sometimes cheerful correspondence of a husband and father also responsible for the systematic murder of millions of people.

Himmler numbered each letter he sent his wife „for the sake of practicality.” In letter number 65, he wrote:

How nice it is to know that when I knock off duty, I’ll be able to spend a few hours with my little wife.

With love. Your, Heinrich.”

The letters are at once unremarkable and unpalatable. Anti-Semitic remarks punctuate the day-to-day of household expenditures and vacation plans.

Lapa collaborated on the film with Himmler’s great niece, who sat in the audience at the premiere, together with Lapa’s grandparents. Afterwards Katrin Himmler told NPR how she felt when she read her great-uncle’s letters for the first time.

„My first impression was how mundane the letters were,” she said. „But look closer, and it is clear what Himmler and his wife believe in: anti-Semitism and the rejection of democracy.”

In July 1942, Himmler wrote to his wife: „I am traveling to Auschwitz. Kisses, your Heini.” The casual note home makes no mention of the recently installed gas chambers he was off to inspect.

Sven Felix Kellerhoff is a senior editor at the daily conservative broadsheet Die Welt, which recently published the documents in an exclusive series.

„Himmler and his wife saw no need to discuss the finer details of his work. He felt no urge to ask for understanding. There’s a sense of normalcy and that is what is so shocking about these letters,” he says.

No Mention Of The Holocaust

Not one of almost 700 letters makes any reference to the Holocaust. Instead, Himmler obsesses about being decent. This is what led Vanessa Lapa to the title of her film.

„To call the movie The Decent One is reflecting the complete perversion and twisted morality of this man. Because, for him, to kill in a decent way is a decent act,” Lapa says.

In Poznań in 1943, Himmler called on high-ranking SS officers to act in a civil manner in the concentration camps. He appealed to them with the jarring Nazi „logic.”

Lapa’s film has been well received in Berlin. But Die Welt’s decision to make a weeklong, iPad-friendly series out of the letters has not been met with the same approval.

The Süddeutsche Zeitung accuses Die Welt of sensationalism and laments the involvement of reputable historians with the project. Alexander Kissler, arts editor of the monthly political magazine Cicero, calls the publication a hack job that panders to emotions.

„Every time I click on the newspaper’s homepage, there it is — Himmler’s grimace, smiling back at me. It’s kitsch and it trivializes history. It says 'that’s our Himmler’ and I find this deeply problematic,” Kissler says.

But for Lapa, her work is done. The letters are out there, no longer hidden away. And soon, they’ll leave the bank vault in Tel Aviv for good. Her family has offered the documents to the German Federal Archives in Berlin, the Holocaust Memorial Museum in Washington and the Yad Vashem Holocaust Museum in Jerusalem.