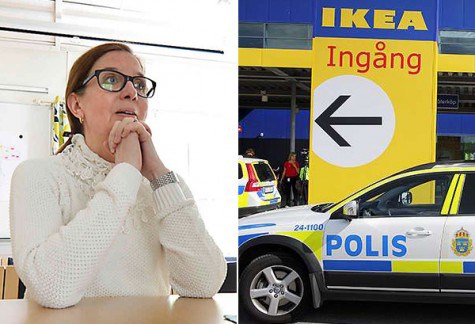 Carola Herlin, Director of the Moro Backe Health Center, was murdered on August 10, along with her son, in the IKEA store in Västerås, Sweden.

A surge of rage has washed over otherwise docile Sweden. After a double homicide at an IKEA store in Västerås, where an illegal alien stabbed two random Swedes to death, more and more people are questioning why the government is exposing Swedish citizens to murderers from across the globe.

On August 10, news of the IKEA murders shocked Sweden. Two asylum seekers from Eritrea (the second largest source of asylum applicants in Sweden), were suspected of having grabbed knives from the kitchenware department and attacked two random Swedes. The victims were 55-year-old Carola Herlin and her 28-year-old son, Emil.

The elder of the two asylum seekers, a 36-year-old man, had twice been denied residency status in Sweden — because he had already been granted residency it in Italy — but he had not yet been deported. (Eritreans without residence permits in other EU-countries automatically get to stay in Sweden.)

The killer also inflicted life-threatening injuries on himself, and underwent several surgeries before the police could finally question him. On August 14, he confessed. His 23-year-old compatriot was released from custody, because the police no longer believe he had anything to do with the murders or had even known what his friend was planning to do.

Fear has now struck the Swedes. Even those who had routinely brand critics of immigration and multiculturalism racist, were shaken to the core. Questions flooded the social media: Who are these people that are let into Sweden? How many of them are not innocent victims of war, but in fact war criminals and other criminals, hiding among the refugees? And should we pay billions in taxes to support and shelter citizens of other countries, while some of them try to kill us?

The fact that the police refuse to deny the persistent rumor that one of the IKEA victims was beheaded, only adds fuel to the fear.

So many questions and no answers. No one from the government has even bothered to make a statement about the horrific double murder. None of the mainstream media has confronted the government about the violent crimes committed by asylum seekers against Swedes. On the contrary – the media have done the utmost to convince Swedes that everything is safe and sound in Sweden. Better than ever, in fact. The day after the double murder, Sweden’s largest morning paper, Dagens Nyheter, published an article titled, “After all, deadly violence is on the decline.” The article begins: