The Atlanta Jewish Film Festival has delivered a series of excellent movies from Poland in recent years, including Oscar winner “Ida” three years ago, but none is better than “Zacma: Blindness,” which had its Southeastern premiere Wednesday night, Jan. 25, in an AJFF screening in East Cobb.

Like “Ida,” “Zacma” is set in Poland in 1962 and involves the Catholic Church and a Jewish woman who played a vicious role in the Stalinist-era Polish government’s oppression of religious dissidents. But whereas “Ida” focuses on what happened during World War II, “Zacma” is about one woman’s search for G-d, meaning and forgiveness in the context of Poland’s long battle between communism and Catholicism. 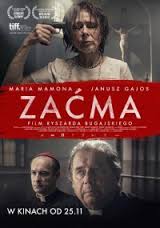 By the time of the film, after the Soviet bloc’s rejection of Stalinism, Brystiger is no longer working for the security service. She visits a school for the blind near Warsaw in the hope of meeting with the primate of Poland. While she waits for that meeting, she experiences flashbacks and hallucinations about her crimes in the 1950s.Written and directed by Ryszard Bugajski, the film is based on the true story of Julia Brystiger, who was born into a Jewish family in eastern Poland (later western Ukraine) in 1902, became a fervent, atheistic support of the Communist Party, and brutalized priests and other Catholics in the first decade after World War II.

Like the best Polish films that reach the United States, “Zacma” aims to open eyes to Poland’s tortured past and does so by applying a touch of the supernatural to gritty realism. The use of light and shadows sets the tone as Brystiger comes to grips with who she was and who she wants to be.

Bugajski said during a Q&A session after Wednesday’s screening that he was drawn to the story by the transformation of Brystiger, who is shown in the middle of the change from Communist evil to religious devotion.

He’s fortunate that his wife, Maria Mamonia, proves to be the perfect choice to portray those extremes. I haven’t seen any of the Oscar nominees for best actress, but I can’t imagine a better performance in 2016 than what Mamonia delivers in “Zacma.”

Bugajski and Mamonia will again answer questions after tonight’s screening at 7:40 at the Regal Tara 4 on Cheshire Bridge Road; it’s a treat to hear them talk about a brilliant film. The movie also is showing Feb. 8 at Lefont Sandy Springs and Feb. 9 at Regal Atlantic Station 18, but without the Polish couple in person.