Why did Amsterdam have to wait for him so long? Too expensive, too busy, too ….? A lot of speculating went on before the concert, caused by his recent cancellations. But Kaufmann came, saw, and conquered. Star soprano Eva-Maria Westbroek and the energetic Residentie Orkest led by Jochen Rieder contributed to the huge success of the afternoon as well. 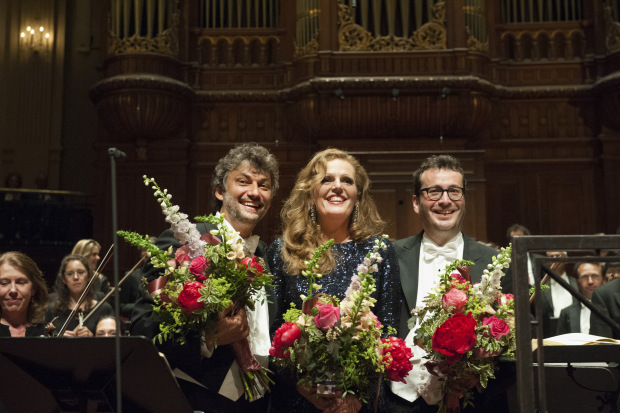 Expectations were high, and the hall was filled with fans, buzzing with excitement from the start. In spite of this, Kaufmann made a cautious start, visibly suffering from nerves.

As much as I loved his singing (very much, in fact), in his first aria ‘Celeste Aida’ Kaufmann had problems winning me over. Part of the problem had to do with his volume. Even with the sympathetic and delicate back-up by the Residentie Orkest he was difficult to hear at times from my seat. His pianissimi and mezza voce phrases were breathtaking, as beautiful as his diminuendo at the end of the aria, but did he make a convincing warrior? Not to me.

‘La vita è inferno all’infelice’ from La Forza del Destino almost went off the rails because of the lethargic tempi. Kaufmann sang heavenly, but taken as slow as this there was hardly any tension, and the fluctuations of the voice made a quasi-artistic impression. Did this matter? No, not really, but with better tempi perfection could have been achieved.