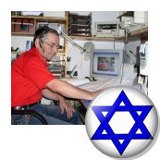 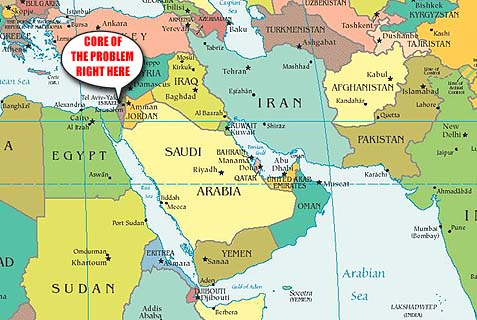 There I was, relaxing in a plastic Adirondack chair in the yard behind my building on Manhattan’s Lower East Side. Arak, a Levantine anisette liqueur, was flowing liberally through my veins when the revelation hit me:

Every single Arab state bordering Israel has a name taken from the Hebrew Bible.

Start on Israel’s north with Lebanon and Syria – neighboring countries named for adjacent mountains, Levanon and Siryon.Levanon is derived from the Hebrew word lavan, meaning white, alluding to the snow cover of the Lebanese range. Siryon is identified in Scripture as the alternate name for Mount Hermon, the majestic peak straddling the present Israel-Syria border.

Though the Syria-Siryon origin has been debated, historian Daniel Pipes states unequivocally in his 1990 book Greater Syria that the name Syria was derived from Siryon.

Around the bend, Israel’s current eastern boundary is formed by the River Jordan, which gave its name to the kingdom on its eastern bank. Jordan is the English rendition of Yarden, meaning “descends from Dan” – in today’s southeastern Lebanon the river flows down from the hills of what was once the territory of the Israelite tribe of Dan.

To the south lies Egypt – known in Arabic as Mizr. Well, that isn’t originally Arabic either – it’s derived from Mitzrayim, which appears 291 times in the first five books of the Hebrew Bible.

Finally, there’s Gaza, wedged between Egypt and Israel, first mentioned in the book of Genesis but made famous by Samson and his exploits in the biblical book of Judges.

Extra, extra, read all about it: Lebanon, Syria, Jordan, Egypt, and Gaza are names right out of the Bible of the Jews. One can safely assume that such a disclosure wouldn’t be enthusiastically received in the Arab world. Expressions of horrified denial and accusations of Zionist conspiracy would in fact surprise no one.

This does, however, beg the following question: Why didn’t these largely Muslim states assume names, say, more Koran-ish?

Here’s the simple answer: the Arabs simply assumed that Lubnan,Sooriya, Ourdun, and Mizr were Arabic; they never knew they were once Levanon, Siryon, Yarden and Mitzrayim.

Israel’s neighbors aside, place names with biblical origins are most common in the region referred to widely for the past 66 years as the West Bank but for the three millennia prior to that by its biblical names of Judea and Samaria. Incidentally, these ancient names have not been exclusively used by Jewish settlers: the United Nations itself (in its General Assembly Resolution 181 of 1947), an organization not widely renowned for its Zionist sympathies, referred to the region as Judea and Samaria, as do all maps of the Middle East published before 1948. The area was dubbed “West Bank” upon its seizure by the Jordanians during Israel’s 1948 War of Independence.

Shortly after my arak-infused afternoon, I had sushi with an old friend who brought along his nephew, a senior at NYU.

The ever-difficult situation in Israel came up, and upon uttering the term “Judea and Samaria” I found myself interrupted and hectored by this spoiled nephew, sanctimoniously demanding that I refrain from using such ideologically-fraught names.

The boy had obviously been poisoned by some tenured Marxist professor in overalls. Drawing upon the meticulous work of the researcher Yoram Ettinger, I explained that I was merely employing the long-used historical names of the area, which happened to be biblical in origin.

Going further, I pointed out that virtually all Arab towns in the area have names derived from the Hebrew Bible: Anata was Anatot (the Prophet Jeremiah’s hometown), Batir was Beitar, Beit Jalla is the Jerusalem neighborhood of Gilo, Beitin was Beit El (so named by Jacob), Mukhmas is Michmash (King Saul’s fortress), El-Jib was Giv’on (where the sun stood still), Jaba was Geva, Jenin was Ein Ganim, Silwan was Shiloach, Selum was Shilo (one of the first capitals of ancient Israel) and Tequa is Tekoa (the prophet Amos’s hometown.) The list goes on.

As for the irony of Israel’s neighboring Arab countries bearing biblical names, this much can be said: almost half the world’s Arabs owe their national identities to the ancestral scripture of the very Jews whose state too many of them wish to eliminate.