Leon Borensztein’s powerful little book Tata (Polish for “Pappa”) pays homage to his father, “Citizen M. Borensztein”. Born in the Polish city of Mińsk Mazowiecki in 1912, M. Borensztein received his first military award in 1947. It was a Grunwald Badge, presented to him from the Commander-in-Chief of the 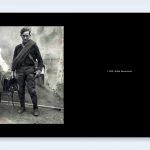 Polish Army, for armed struggle against the Germans. He soon after received his second medal, for “Victory and Freedom”. The pages of Tata turn to document the many other medals he received through the 1960s. As the list of commendations grows, so the accompanying photographs of the badges begin to feel heavier and almost claustrophobic. That is, until the final spread reveals a white shirt with a single medal. It was presented by The Ministry of Defense of the State of Israel to Mr. M. Borensztein in 1974, for volunteering in the Yom Kippur War.

Leon Borensztein’s photographs have been widely published and exhibited in the United States and abroad, and are included in the permanent collections of such institutions as the San Francisco Museum of Modern Art; Art Institute of Chicago; Museum of Fine Arts, Houston; and the Tokyo Photographic Art Museum.

Limited to 500 numbered copies, each copy of Tata includes a 5×7 inch original print that has been signed by the artist.

To subscribe to the One Picture Book Two series, and receive a copy of each book and signed print at the subscription price of $40, please contact us >