The yiddish cabaret: Jerusalem quatet’s tribute to their grandparents 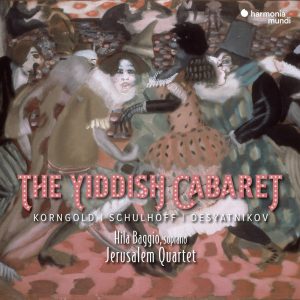 The Jerusalem String Quartet never disappoints. Never. Whatever they play. It’s not just about perfection, but also, or perhaps mainly, about their attention to the story behind the notes. For their involvement in the pieces they play. And their search for the truth that may not even exist. But with this album they have gone far above themselves and their own standards. Something that might have to do with the fact that they were allowed to choose the works themselves, none of which are commonplace?

With their choice they have also made a statement. Something we all know but still don’t want to admit out loud because we feel uncomfortable about it? About the influence of Jews and their contribution to our Western culture?

These days, Schulhoff and certainly Korngold are no longer curiosities, although of the latter mostly his operas are performed these days. Yet his chamber music compositions are not to be sneezed at. Listen his second string quartet, for example! At the first notes you get the nostalgic feeling of an unattainable lover and an intense desire. Beautiful and painful at the same time. Not only are the notes divinely beautiful, it is also the performance. Yearning and full of desire.