Shlomo Aviner, who moved to Israel from France in the 1960s, suggests fire that gutted iconic church may have been divine retribution for burning of Jewish manuscripts in 1242

A prominent religious-Zionist rabbi known for his extremist views suggested on Wednesday that the fire that gutted the famed Notre Dame Cathedral in Paris earlier this week may have been divine retribution for the mass-burning of Talmud volumes by French Catholic priests in the city eight centuries earlier.

Rabbi Shlomo Aviner, the rabbi of the Beit El settlement and head of the Ateret Yerushalayim yeshiva, said that Jews should not commit arson against churches, but also that there was no duty to be saddened by the fire, which gutted the famed 12th-century cathedral.

After initially balking at the assertion that the Notre Dame fire was divine vengeance, as “we don’t know the secrets of God,” Aviner went on to say it was “possible to say so.”

Christianity, he explained, “is our number one enemy throughout history. [They] tried to convert us by arguments and by force, carried out an inquisition against us, burned the Talmud, expulsions, pogroms. Western anti-Semitism draws from Christianity’s hatred of the ‘murderers of God.’ It also had a role in the Holocaust.” 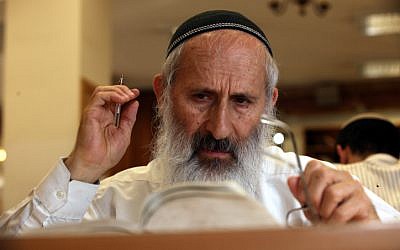 He suggested the Notre Dame fire may be divine retribution for the mass-burning of Talmud manuscripts near the cathedral in 1242, following a Talmudic disputation.

“The first great Talmud burning happened in Paris, right there at the Notre Dame Cathedral square,” Aviner wrote. “It was the result of the Paris trial in which Jewish sages were forced to debate Christian sages, and the result was the burning of the Talmud. Volumes of Talmud were brought in 20 carts and burned there, 1,200 Talmud volumes. So [the fire demonstrates] ‘there is justice and there is a Judge,’” he wrote, the quote a reference in Jewish religious literature to divine justice.

The 1240 Disputation of Paris, in which rabbis were forced to defend accusations that the Talmud was anti-Christian, was remembered by medieval Jews as a traumatic event. The public “trial” culminated in the burning of some 1,200 volumes of Talmud and other Jewish holy texts in Paris in 1242.

In a period before the invention of the printing press, the destruction of so many manuscripts amounted to a significant setback for Jewish learning in the region.

The fire at Notre Dame began Monday afternoon, devastating the 800-year-old cathedral in the heart of Paris. French officials have tentatively attributed the blaze to refurbishment work begun in recent months in the medieval landmark.

By nightfall on Monday, the fire had claimed most of the building’s roof, including its steeple, which crashed to the ground, as well as an unknown number of priceless artifacts and works of art housed in the building. The church’s main organ, which had close to 8,000 pipes, also suffered extensive damage.