THE STEPSISTERS OF MARIA CALLAS 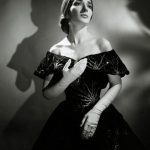 Would we still love Callas so much if she had been an ‘ordinary’ happy person, like most of her colleagues? If she had been happily married and had had children, what she so longed for? If she didn’t suffer from bulimia and was not constantly fighting with her weight and body? If she had not fallen in love with Aristoteles Onassis, the super-rich Greek shipowner who left her to marry an even more famous lady? And if she had not lost her voice prematurely? Speculations, of course, but since even the most honest opera lover has something of a tabloid reader it keeps buzzing. People simply love gossip.

Rumour, success, being in the spotlight, are the most important ingredients in the lives of people who find their lives boring and everyday and lose themselves in the stories of the ‘rich and beautiful’. It should be noted that they feast most on the dark sides of the stories, because there is no greater happiness than sorrow.

Maria Callas was a diva with a true cult status. She owed this not only to her singing, but also to her unmistakable acting talent, her attractive appearance and her, unfortunately, more than tragic personal life.

However great, famous, loved and adored, Maria Callas was, she did not invent opera, nor was she the greatest actress amongst singers. Not all singers were equally gifted actors, but the image of a fat lady standing motionless on stage fluttering only her hands is not at all accurate.

Just think of Conchita Supervia, Geraldine Farrar, Marjorie Lawrence or Grace Moore, but there were more.

Geraldine Farrar as Carmen in a film from 1915:

What Callas truly was, was a pioneer in (dramatic) belcanto, and that happened more or less by accident (consult the DVD The Callas Conversations vol. II). It was a genre that at the time was a little neglected. It was she who gave us back the forgotten operas of Bellini, Donizetti and Spontini, but was she really the first?

There are many more sopranos from the time of Callas who sang at the highest level and deserve to be discussed. The sopranos I am going to talk about were all more or less Callas’ contemporaries and all sang almost the same repertoire (not counting spinto sopranos that sang mainly verist roles, such as Magda Olivero, Carla Gavazzi or Clara Petrella).

These divas missed the chance to be in the right place at the right time. Or: to meet someone who was important enough not only to boost your career, but also to give you a record deal.