Even after the victorious American and Allied forces took control of the camps, the survivors — mainly Jews, but also small numbers of gays, Roma, Communists, Jehovah’s Witnesses and others — remained for months behind barbed wire and under armed guard in what became known euphemistically as displaced persons, or D.P., camps. Many Jews were left wearing the same notorious striped pajamas that the Nazis first gave them.

With the American forces overwhelmed by the sheer numbers of refugees under their control, underfed survivors lived for months in decrepit camps in Germany and Austria — a number of them on the same grounds as the concentration camps. Even after conditions improved, thousands of former prisoners remained inside and in limbo for as long as five years because the United States and most other nations refused to let them in.

In the early months after the war, thousands of survivors died from disease and malnutrition. Food was so scarce that rioting broke out at some camps, as Allied commanders refused to give extra food rations to Jewish survivors because they did not want to be seen as giving them preferential treatment over German P.O.W.s and other prisoners.

Faced with complaints by outside Jewish groups about conditions of “abject misery,” President Harry S. Truman sent a former immigration official, Earl Harrison, to Europe to inspect the camps. His findings were blistering. The survivors “have been ‘liberated’ more in a military sense than actually,” Harrison wrote Truman in the summer of 1945.

“As matters now stand,” he wrote, “we appear to be treating the Jews as the Nazis treated them except that we do not exterminate them. They are in concentration camps in large numbers under our military guard instead of S.S. troops. One is led to wonder whether the German people, seeing this, are not supposing that we are following or at least condoning Nazi policy.”

I ran across Harrison’s report a few years ago while researching a book on the flight of Nazis to the United States after the war. As I examined the path the Nazis took out of Europe, I struggled to understand how so many of them had made it to America so easily while so many Holocaust survivors were left behind.

One answer came in a copy of Gen. George S. Patton’s handwritten journal. In one entry from 1945, Patton, who oversaw the D.P. operations for the United States, seethed after reading Harrison’s findings, which he saw — quite accurately — as an attack on his own command.

“Harrison and his ilk believe that the Displaced Person is a human being, which he is not, and this applies particularly to the Jews who are lower than animals,” Patton wrote. He complained of how the Jews in one camp, with “no sense of human relationships,” would defecate on the floors and live in filth like lazy “locusts,” and he told of taking his commander, Gen. Dwight D. Eisenhower, to tour a makeshift synagogue set up to commemorate the holy day of Yom Kippur.

“We entered the synagogue, which was packed with the greatest stinking mass of humanity I have ever seen,” Patton wrote. “Of course, I have seen them since the beginning and marveled that beings alleged to be made in the form of God can look the way they do or act the way they act.”

Other evidence emerged revealing not only Patton’s disdain for the Jews in the camps, but an odd admiration for the Nazi prisoners of war under his watch.

Under Patton, Nazis prisoners were not only bunked at times with Jewish survivors, but were even allowed to hold positions of authority, despite orders from Eisenhower to “de-Nazify” the camps. “Listen,” Patton told one of his officers of the Nazis, “if you need these men, keep them and don’t worry about anything else.”

The Harrison Report was damning: 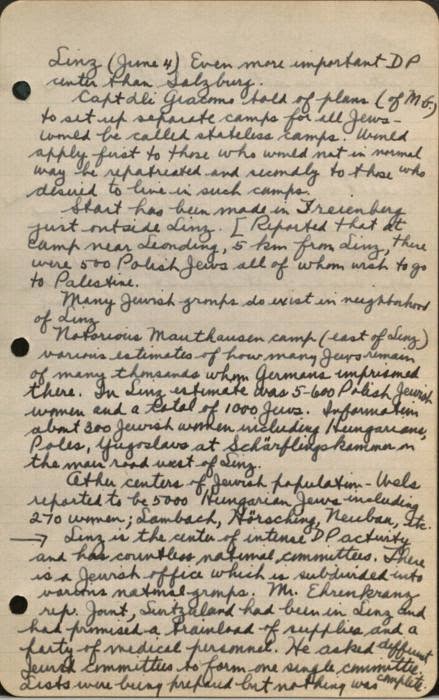 A page from Harrison’s personal notebook

(1) Generally speaking, three months after V-E Day and even longer after the liberation of individual groups, many Jewish displaced persons and other possibly non-repatriables are living under guard behind barbed-wire fences, in camps of several descriptions (built by the Germans for slave-laborers and Jews), including some of the most notorious of the concentration camps, amidst crowded, frequently unsanitary and generally grim conditions, in complete idleness, with no opportunity, except surreptitiously, to communicate with the outside world, waiting, hoping for some word of encouragement and action in their behalf.

(2) While there has been marked improvement in the health of survivors of the Nazi starvation and persecution program, there are many pathetic malnutrition cases both among the hospitalized and in the general population of the camps. The death rate has been high since liberation, as was to be expected. One Army Chaplain, a Rabbi, personally attended, since liberation 23,000 burials (90 per cent Jews) at Bergen Belsen alone, one of the largest and most vicious of the concentration camps, where, incidentally, despite persistent reports to the contrary, fourteen thousand displaced persons are still living, including over seven thousand Jews. At many of the camps and centers including those where serious starvation cases are, there is a marked and serious lack of needed medical supplies.

(3) Although some Camp Commandants have managed, in spite of the many obvious difficulties, to find clothing of one kind or another for their charges, many of the Jewish displaced persons, late in July, had no clothing other than their concentration camp garb-a rather hideous striped pajama effect-while others, to their chagrin, were obliged to wear German S.S. uniforms. It is questionable which clothing they hate the more.

Harrison also noticed that most of the Jews he spoke to wanted only to go to their historic homeland:

For reasons that are obvious and need not be labored, most Jews want to leave Germany and Austria as soon as possible. That is their first and great expressed wish and while this report necessarily deals with other needs present in the situation, many of the people themselves fear other suggestions or plans for their benefit because of the possibility that attention might thereby be diverted from the all-important matter of evacuation from Germany. Their desire to leave Germany is an urgent one. The life which they have led for the past ten years, a life of fear and wandering and physical torture, has made them impatient of delay. They want to be evacuated to Palestine now, just as other national groups are being repatriated to their homes. They do not look kindly on the idea of waiting around in idleness and in discomfort in a German camp for many months until a leisurely solution is found for them.

With respect to possible places of resettlement for those who may be stateless or who do not wish to return to their homes, Palestine is definitely and pre-eminently the first choice. Many now have relatives there, while others, having experienced intolerance and persecution in their homelands for years, feel that only in Palestine will they be welcomed and find peace and quiet and be given an opportunity to live and work. In the case of the Polish and the Baltic Jews, the desire to go to Palestine is based in a great majority of the cases on a love for the country and devotion to the Zionist ideal. It is also true however, that there are many who wish to go to Palestine because they realize that their opportunity to be admitted into the United States or into other countries in the Western hemisphere is limited, if not impossible. Whatever the motive which causes them to turn to Palestine, it is undoubtedly true that the great majority of the Jews now in Germany do not wish to return to those countries from which they came.

Palestine, while clearly the choice of most, is not the only named place of possible emigration. Some, but the number is not large, wish to emigrate to the United States where they have relatives, others to England, the British Dominions, or to South America.

Thus the second great need is the prompt development of a plan to get out of Germany and Austria as many as possible of those who wish it.

Eric Lichtblau in the NYT: