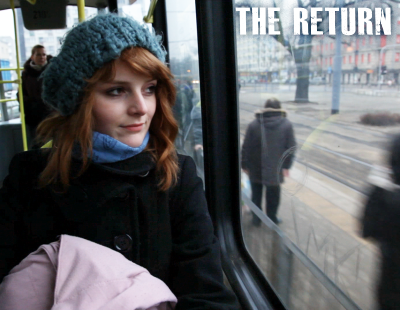 I’m happy to report a new set of screenings of THE RETURN here in the new year.

The film will begin a series of synagogue screenings with one here in New York on January 31 (and more being announced soon). The Film Festival run continues in Washington D.C., Oakland, Palm Springs and Western Mass. Bookings in both Atlanta and Athens prove THE RETURN plays well in the state of Georgia! Also international screenings continue in England, Uruguay and Australia. It’s all very exciting!

There are many bookings still rolling in; updated information can always be found at the website, or like us on Facebook and track all the action there.

Briefly, THE RETURN explores the unique reality of being Jewish in Poland today by following the intertwined lives of four young women who are representative of a new generation of Polish Jews—raised Catholic, only to discover they were Jewish in their teens. The film follows their struggle to create a living Jewish identity and community in a virtual vacuum—within the country that was once the epicenter of the Jewish world.THE RETURN is being distributed by 7th Arts Releasing, and together we are lining up the next group of screenings at film festivals and other locales. These will include Toronto, Buffalo, Los Angeles, Chicago, Dartmouth, Stanford and many other places.

Feel free to pass this along to folks you think might be interested. And please – if you do make it to a screening, be sure to come up and say hello!