A place for prayer and place for discussions – a synagogue and lecture hall, a place where the religious and the secular can meet. This was mainly the request I received from Paulette and Norbert Cymbalista when they commissioned me to construct a new building on the campus of Tel Aviv University.

An appropriate site was chosen in consultation with the university authorities in January 1996: a corner of the main central lawn where large student assemblies are held; this location ensured that the new building would readily be perceived as serving the students themselves. 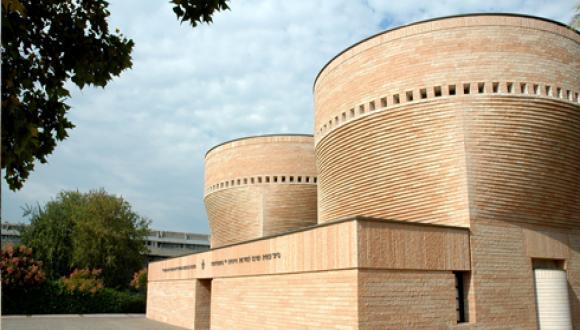 In today’s world, architects rarely receive commissions with such clear and precise aims as the ones requested: to build two spaces that are separate in function but unified in design and to express the need for spirituality that is shared by all people. My concept of the project was helped not only by the clients’ clear ideas about what they wanted, but also by their generosity. I firmly believe that any project resulting from such a commissions must be simple and powerful.

The two main spaces specified in the brief – two separate and distinctive areas – form a dual image of two towers linked by a ground floor lobby where the service are located. The two squared-based volumes of the towers rise into a conoid, that configures as a circle at roof level. Both towers are built using the same materials – pietra dorata, or „gilded” Tuscany stone inside, Verona stone outside – and both interiors are top-lighted in exactly the same way. Thus, they generate identical geometrical spaces designed for different functions, just as a two-headed creature presents a mysterious duality of possible meanings and functions.

However, the real themes – apart from the obvious functionality of the synagogue and lecture-hall – are wholly architectural, in the sense that the intrinsic features of the spaces themselves have absolute priority. The sculpture-like exteriors and unusual proportions of the two towers in relation to the service volume render them impressive, despite the fact that they are actually quite small. The enigmatic, totem-like appearance of the structure challenges users to ask what the building is communicating – as both a mirror of its times and repository of thousands of years of memories.

The Synagogue and Auditorium >

Why Did I Want to Build a Synagogue?

I should have asked myself this question in 1996, when I started this adventure. But I was so busy then, putting the pieces of the puzzle together, that I had no time to look for psychological explanations. Two years after the inauguration, I still try to understand the motives.