On the day I landed in Munich with my Israeli teammates to participate in the 1972 Olympic Games, one German newspaper reported: ‘Shaul Ladany is walking on familiar ground.’

As someone who had witnessed at first-hand the horrors of Bergen-Belsen concentration camp as a child, the German media had become taken with the story of my return to a country whose people had once attempted to eliminate Jews from the face of the Earth.

Yet all too soon my pride in this had turned to horror when, in the early hours, in my bed in the Olympic village, I was shaken awake by a fellow athlete who’d heard a gunshot.

Palestinian terrorists had just claimed their first victim in what would become the cold-hearted massacre of 11 Israeli athletes — though I was, of course, unaware of that fact. 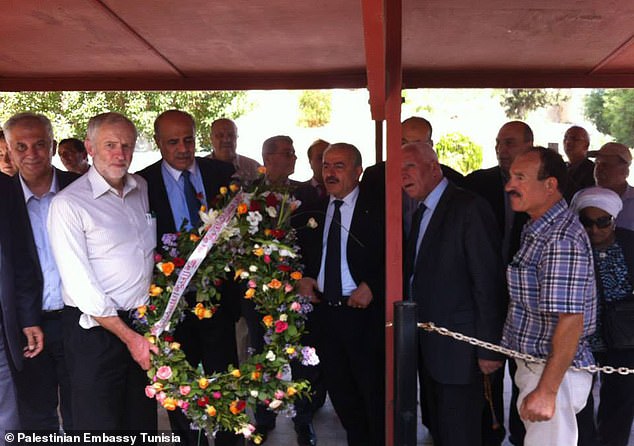 Still in my pyjamas, I cautiously opened the main door of our apartment and saw a dark-skinned, heavily armed man standing guard at the adjacent apartment.

Someone was pleading with him for mercy.

‘The Jews are not human,’ replied the terrorist.

In one calculated sentence, he had distilled the very essence of what it means to be anti-Semitic.

So, imagine my disgust when, last summer — at my home in Israel — I saw the Daily Mail’s front page picture of the leader of the British Labour Party holding a wreath in 2014 just a few yards from the graves of terrorists who masterminded the Munich massacre.

It confirmed what I, a committed Anglophile, have suspected for some time: that the dark force of anti-Semitism that was once associated with Nazism had seeped into Britain’s political life in a way I could never have imagined.

And nowhere is this poison more prevalent than — as the Mail has reported week in, week out — at the very top of the Labour Party, which was founded to promote social justice and equality.

As I see it, Labour’s once-cherished principles have now been systematically trashed by Jeremy Corbyn’s leadership, a man described by one of his own veteran Jewish MPs, the much admired Margaret Hodge, as an ‘anti-Semitic racist’.

As a result, Britain’s reputation as a beacon of tolerance is being seriously undermined.

This week, the festering sore of bigotry in Labour has caused even more offence following the odious behaviour of the Derby North MP Chris Williamson, one of Corbyn’s most vocal supporters.

In a speech in Sheffield, he displayed remarkable hostility to the British Jewish community, claiming that Labour had ‘given too much ground’ and had been ‘too apologetic’ about anti-Semitism in its ranks.