Having read extensively about the Holocaust, I was surprised that I had never come across the rescuer named Carl Lutz. Neither had anyone else with whom I spoke. Jews honor heroes like Oskar Schindler and Raoul Wallenberg, yet, inexplicably, Carl Lutz, someone who saved over 60,000 Jews, is virtually unknown.

Schallié explains that Lutz’s name remains unrecognized largely because of his unassuming nature and low profile. Lutz epitomized the Talmudic teaching from Ethics of the Fathers: “Emor me’at ve’aseh harbeh, Say little and do much.”

Schallié and Hirschi undertook the massive research project of interviewing 36 survivors around the world who were rescued by Carl Lutz. (Of these, almost half live in Israel and one fourth are in the United States.) The editors were probably unaware of a remarkable coincidence: 36 equals „double chai” in Hebrew, with 18 – chai – representing life.

The son of a Swiss tradesman, Lutz displayed early interest in a diplomatic career. With remarkable initiative, he immigrated to the U.S. alone, at age 18, to earn money for college. He worked for the Swiss Legation in Washington, D.C. and graduated from George Washington University in 1924.

Lutz provided approximately 62,000 Jews with visas to escape from Nazi Europe, the largest rescue operation during the Holocaust. 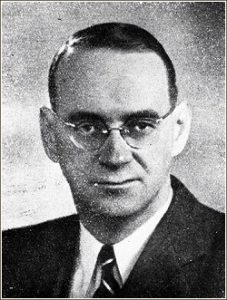 Lutz had been Vice-Consul in Palestine in 1935, before being reassigned to Budapest. In Hungary, neutral Switzerland represented the interests of Britain, a member of the Allied forces fighting against Nazism. Thus, Lutz was in a unique position to facilitate Jewish immigration to British-occupied Palestine. Lutz also placed the Jewish Agency under Swiss protection. These unique advantages enabled him to provide approximately 62,000 Jews – half the Jewish population of Budapest – with visas to escape from Nazi Europe. This figure – the largest and most successful rescue operation of Jews during the Second World War – is roughly equal to the entire population of Gaithersburg or Bethesda.

Oskar Schindler, by contrast, rescued 1200 Jews. So, while Lutz is sometimes called “The Swiss Schindler”, Schindler might more appropriately be titled “the German Lutz”.

In the book, survivors describe how Lutz devised “Schutapasse” (safe conduct passes) and safe houses to implement his rescue operations. Lutz’s rescue strategy was later adopted by the embassies of other neutral countries. Among those who consulted Lutz and followed his lead was the Swedish diplomat Raoul Wallenberg.

The Glass House, headquarters of Lutz’s 76 Swiss safe houses in Budapest was the converted showroom of a glass factory. It became an annex of the Swiss Embassy and a center for producing forged documents. It housed 25,000 Jews at one time. It is today a museum dedicated to that history.

Survivor Alexander (Sandor) Schlesinger, now residing in Houston, Texas, describes how he and his brother were arrested and ordered to dig their own graves. Miraculously, Carl Lutz arrived in an official car bearing the image of the Swiss flag and saved them from imminent death.

The book also includes a tribute by George Somogyi, whose family found refuge in the Glass House. Mr. Somogyi delivered these remarks at the Glass House Exhibition at the Holocaust Museum in Houston in 2011.

“We can give credit for our survival solely to Carl Lutz. I… am very grateful to Carl Lutz, because my immediate family survived…I was able to have a good childhood in the loving care of both of my parents…whereas many surviving children were left orphans.”

In 2014, George Washington University posthumously awarded its heroic alumnus Carl Lutz the President’s Medal for his courageous, lifesaving achievements. The award was presented to Agnes Hirschi, who, along with her mother, was rescued by Lutz. Lutz later married Hirschi’s mother.

With their moving and incisive portrayals, Schallié and Hirschi demonstrate that Carl Lutz accomplished more, with less fanfare, than any other Holocaust rescuer.