The last of the good samaritans

You may well be aware of the New Testament parable of the good Samaritan. But you probably don’t know that there are around 800 ancient Israelite Samaritans still living today.

When people call someone a ‘good Samaritan’, they may know the parable of the good Samaritan from the Gospel of Luke, where a Samaritan helped a man who was beaten, stripped of his clothes and left by the roadside to die. But they probably don’t know that there are hundreds of ancient Israelite Samaritans still living today. I was so fascinated when I heard this that I decided to find a way to meet them when I was in Israel.

My first visit was at the turn of the new millennium. Although tension was high between Israelis and Palestinians, I found a tour guide who agreed to drive me from Israel to the northern West Bank and then up Mount Gerizim to the Samaritan village of Kiryat Luza. We passed modest limestone houses and arrived at the dusty main street, where the guide stopped in front of a small, two-storey museum. Inside, it was the size of a large living room, and I saw a diorama of ancient priestly garments, a sample of round matza (unleavened bread) and a genealogical tree in the shape of a menorah (seven-branched candelabrum) that went back thousands of years. 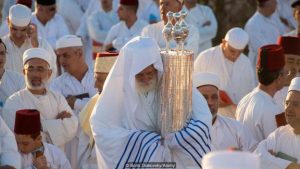 One wall was covered with photographs of austere, bearded old men wearing turbans. The priest, who was the guardian of the museum, pointed to one of them and said, “That was my father, the kohen gadol, or high priest of the Samaritans. The priestly lineage goes back to Aaron, the brother of Moses.”

“Moses of the Ten Commandments?” I asked. He nodded.

And that’s when I lost it. I began to cry, and the tears never stopped until I left the mountaintop. I felt I had encountered something that was very ancient, powerful and true.