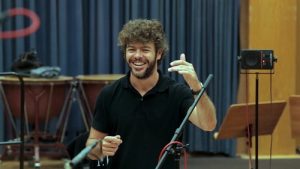 For some people different standards apply than for ordinary mortals and everything they touch turns into gold, and they don’t get caught up in it. Pablo Heras-Casado is such a homo universalis. The young Spaniard (Granada 1977) was voted the ‘2014 Conductor of the Year’ in December 2013 by the prestigious Musical America’s. Rightly so? Premature? Considered on potential growth?

Heras-Casado masters all genres of classical music: from baroque to modern and from chamber music to opera. He conducts the largest symphony orchestras of the world, but he is equally fond of the Freiburger Barochokester and the Ensemble Intercontemporain.

The conductor is therefore busy. Very busy. Today he is, so to speak, still in New York, tomorrow in Amsterdam and the day after in Freiburg. Or Madrid, Vienna, Barcelona, Brussels… If you look at his diary, you’ ll start to feel dizzy.

He doesn’t like Skype, hates e-mails and the telephone connection fails twice. But three times is a charm and that’s where we are now: me in Amsterdam and him in Neumarkt, where he is on a Schumann tour with his “Fabulous Freiburger BarockOrchester” and his “dream team” with Isabelle Faust, Alexander Melnikov and Jean-Guihen Queyras. Then comes Carmen in St. Petersburg, a concert with all modernists in New York and Die Zauberflöte (the successful Amsterdam production of Simon McBurney) at the Festival d’Aix-en-Provence.

He started his career as a singer and his roots lie in early music. What made him decide to conduct? And, since he’s an all-rounder, does he have a preference for a particular style? Period? Genre?

“Singing has always been prominent in my life, that’s how it started. It was (and still is) the most important factor in my life and in my career. Why did I start conducting? Because I wanted to share my ideas, my energy. Besides singing, I also play the piano and violin, but conducting gave me the opportunity to really open up to the outside world and to make my mark on a work. In this way I was able to make my voice be heard better, that was also what I insisted on. I made the decision when I was 14, 15, so I was a very curious boy.”

“I have no preferences. I am a musician, that’s how I feel and I want – and I hope, that I can do it – to embrace all music. I can’t say that Schumann, a composer who is now on my menu every day and whom I adore, is a bigger composer than, for example, de Victoria. Or Praetorius.”

“I love everything, I’m really an omnivore and I want to try everything. I don’t tell you anything new when I tell you that I love most what I’m doing right now. Right now it’s Shostakovich, I’ve come to love him sincerely and for the time being I can’t get enough of him.”