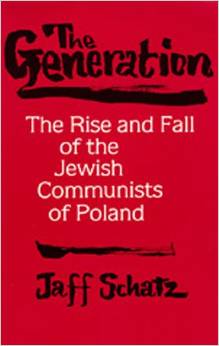 Revolutionaries and rebels, shoemakers and tailors, refugees, soldiers, intellectuals, and apparatchiks. They were the extraordinary generation of Polish-Jewish Communists—”the last true Communists,” as some of them say today. With pathos and deeply informed insight, Jaff Schatz relates the life story of the Jews who joined the Polish Communist Party in the late 1920s and early 1930s, only to become its victims thirty years later.

Schatz draws on archival research and interviews with forty-three surviving members of this generation that gave up everything but their dream of a new world order. He frames the personal drama of their rise and fall with important questions about the interaction of biography and history, showing how the lives ofThe Generation uniquely concentrate the recent history of East-Central Europe.