The Story Behind Frank Sinatra’s $10,000 Yarmulke

(JTA) — When a huge auction was held at Sotheby’s earlier this month of items belonging to Frank Sinatra and his wife Barbara, the item that made the most headlines was one of the smallest: a hand-knit yarmulke, owned by Frank, which was purchased for nearly $10,000 by an unknown party.

But untold, until now, was the story why Sinatra had a kippah, where and when he got it, and the memorable night nearly 40 years ago when multiple members of the Rat Pack were among the unlikely guests of honor at a fundraising dinner for a Jewish day school on the Jersey Shore. 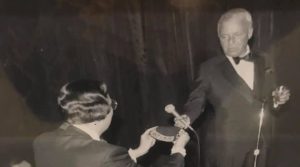 The kippah was presented to Sinatra on an evening in May or June of 1981, at the old Teplitzky’s Hotel in Atlantic City. The occasion was the annual awards dinner held by the Hebrew Academy of Atlantic County, then located in Margate, N.J. And the man presenting the kippah to a tuxedo-clad Ol’ Blue Eyes was Samuel “Sonny” Schwartz, a longtime journalist, columnist, radio host and man-about-town in the Atlantic City area.

A photo of the occasion was shared with us by the late Schwartz’s daughter, Pauline, who said that a framed version of the photo hangs in her mother’s home to this day.