As the world’s eyes are glued to the Winter Olympics, this is the story of a Jewish Olympic hero that few know. While Jews invented neither the winter or summer Olympic Games—we’re not really that kind of people—a Jewish man did invent the Paralympics. A German Jewish refugee in England named Dr. Ludwig Guttmann. And his is one of the most inspirational of any Olympic stories.

Dr. Ludwig Guttmann was just one man, but he brought about a profound change in the way society views handicapped people. As just one man, he changed the world for a whole group of people in society. A committed Jew, when he was a student in the 1920s and felt a keen awareness of the anti-Semitism in Germany, he arranged for Jewish students to come together to play sport and to practice self-defense in order to protect themselves because, as he said, “nobody need ever feel ashamed to be a Jew.”

By 1933, Guttmann, a proud Orthodox Jew, was already considered the top neurosurgeon in Germany. But of course 1933 was the year Adolf Hitler came to power in Germany, and all Jews were thrown out of the professions. The only place Guttmann could work was in the Jewish hospital in Breslau. It was there five years later, on the day after Kristallnacht, as mobs roamed Germany attacking Jews, and rounding them up to send to concentration camps, that Guttmann told hospital staff to admit any Jew without question. And that day, Guttmann saved 60 lives.

But in 1939, Guttmann had to leave Germany and came to Britain. His extraordinary skills were immediately recognized in his new country. Particularly outstanding was his unique expertise, which dated back to one of the first patients he ever treated in 1917, in treating paraplegics—people with injuries to the spinal chord. In late 1943, the British government asked Guttmann to set up the National Spinal Injuries Centre at Stoke Mandeville Hospital in Buckinghamshire, which was the first of its kind in Britain.

Guttmann worked at the National Spinal Injuries Centre from its opening in 1944. When Guttmann arrived, it was assumed that paraplegics were incurable. They were sedated, kept bedridden and left to die. The mortality rate in those years was 80 percent. There were few survivors. They were seen as incurable. They were useless, hopeless cripples. There was no encouragement for them to return to normal life. And life expectancy after becoming a paraplegic in those days was three months.

But Guttmann said, “No, these are human beings, with a life ahead of them, as well as behind them. There’s no reason they shouldn’t work, marry, have families, have excitement, and have happiness.” So with sheer will, and dedication and genius, Guttmann began to bring paraplegics in Britain back into life. He began by reducing his patients’ painkillers because they were keeping them bedridden and immobile and only semiconscious. Then Guttmann made them sit up. And it was painful for them. And then he made them take exercise. And then he brought in a physical education instructor from the British army to throw balls at them. And then he had nurses to tell them their life stories, to reinvigorate them, and then he got them out of bed and into wheelchairs. And then he got them to play games. And then he had the hospital staff get into wheelchairs and play games with them. And slowly he brought his patients back to life.

Guttmann used sports to help his previously written off patients to find passion and the strength to dream and the courage to hope. At first everyone was against him—the nurses, the doctors, the army instructors. They thought he was crazy, they thought he was attempting the impossible. Other doctors believed the patients to be moribund, cripples who were never going to be able to lead a normal life. It was believed they should be left to die. Guttmann, however, disagreed. With absolute determination he kept going. His patients rediscovered their love of life. 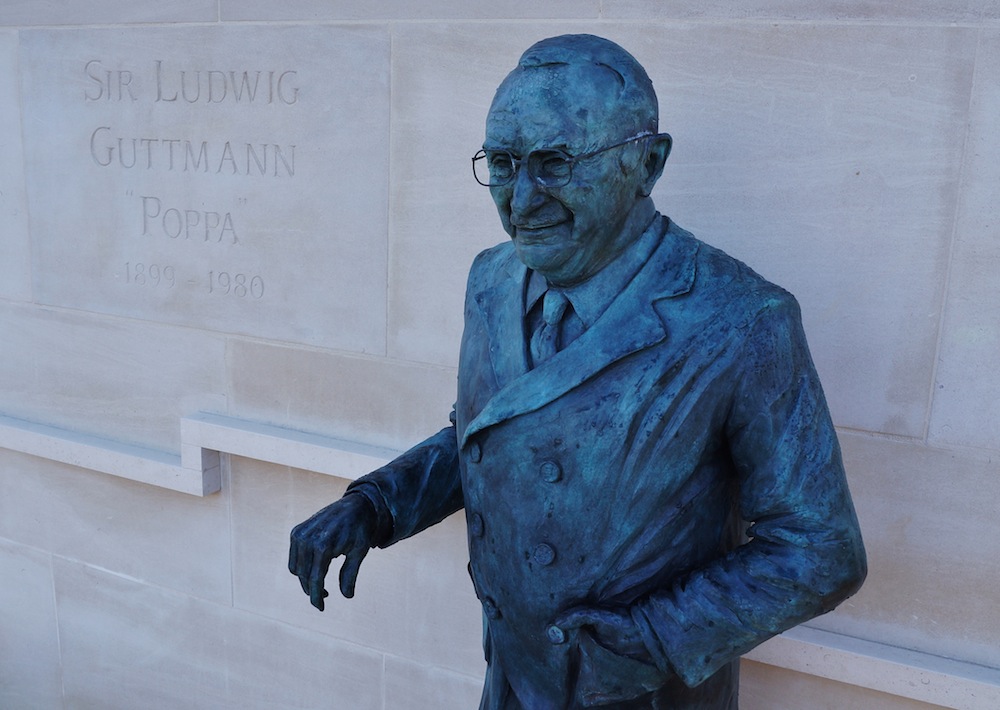 But it was not without pain. Sometimes it came with great inner conflict. But Guttmann realized that sport was the thing to overcome this pain. He developed his games from a local competition, to a national competition, to an international competition in 1948 in parallel to the Olympic Games. And it kept going until 1960, when the first ever Paralympic Games took place in Rome. The most recent Paralympics in London in 2012 were the biggest ever with 4,200 athletes from 164 countries; and Dr. Ludwig Guttmann’s daughter, Eva Loefflfer, served as the mayor of the Paralympic Village. She had been a volunteer at the first wheelchair games way back in 1948, when she helped her father by pulling arrows out of archery targets and picked up errant table tennis balls.

When he came to Britain, Guttmann became an active member of the Jewish community. His Jewishness was important to him; it guided his life. So when Mexico City backed out of hosting the 1968 Paralympic Games, Guttmann arranged for them to be relocated in Ramat Gan in Israel. And in 2012, Guttmann’s daughter Eva and Jewish Paralympic participants held a Kabbalat Shabbat service at the start of the games, which were 40 years after the tragic events of the Munich Olympics at which 11 members of Israel’s Olympic team were murdered. For Guttmann life was sacred. He chose life. He knew that healing the soul was vital to healing the body.

So perhaps as we watch the Winter Olympics from our sofas, we too can learn from Dr. Guttmann. Don’t lie there and accept yourself the way you are, Guttmann told his patients. Sit up, get out of bed, show the world and show yourself that you can become a better person than you are—that you can give to others and make the world a better place than it is. Leave your comfort zone, he beseeched. Have the courage to do something you never did before. It hurts when you leave your comfort zone. Growing hurts. And yet we have to do it.

Knighted in 1966, Ludwig Guttmann died in 1980 at the age of 80. Throughout his long career, he never gave up on his patients. Through his work, Guttmann reminds us that any real achievement hurts. He showed that a more active life is a more vibrant life. He was the Jewish Olympic hero that gave a whole group of people back their life.