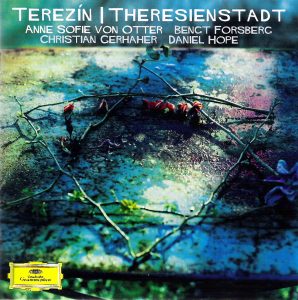 The songs Anne Sofie von Otter, assisted by baritone Christian Gerhaher, sings on the CD Terezín – Theresienstadt, released in 2008 on Deutsche Gramophon (DG 4776546), belong to a variety of music genres. They have one thing in common: all of them were composed in the Terezín concentration camp and their creators who were deported there were later murdered in Auschwitz.

The initiative came from von Otter herself: for the Holocaust commemoration in Stockholm she collected a wide selection of the ‘Terezín songs’ and compiled a recital of them.  This programme was then recorded for CD, ” because we must never forget. “

It is a CD you really need to listen to from start to finish even though many of the songs come from the lighter genre. Most moving are the songs by Ilse Weber.

Try to keep a dry eye when listening to ‘Wiegala,’ the lullaby that Weber sang to the children in the gas chambers. Or the terrifying words “I want to go home so badly” from Weber’s ‘Ich wandre durch Theresienstadt.’