Offenbach aficionados may rejoice. Here is the first complete recording of his opéra comique in 3 acts, 4 tableaux, Fantasio. It is based on Alfred de Musset 1834 stage play of ther same title. The musical version was not a big success at the time of its premiere at the Salle Favart in Paris, in January 1872, but like so many Offenbach titles, Fantasio was nonetheless produced at the Theater an der Wien a month later, it was also seen in Graz and Prague in October 1872, and Berlin in 1873. A revival, in a new version, was mounted in Magdeburg in June 1927 as Der Narr der Prinzessin. Then, it seems, it was for gottenfor a long time. 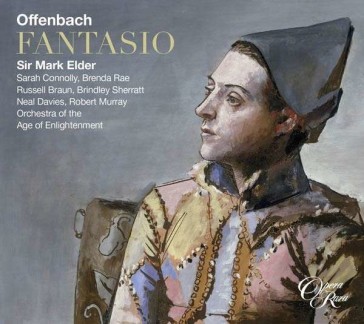 Offenbach later re-used the chorus of students from the first act of Fantasioin The Tales of Hoffmann, where it becomes the famous student chorus in the prologue, and the voice of Antonia’s mother in act 3 of Hoffmannenters with a theme from the overture of Fantasio. So at least two tunes from Fantasio have become very well known, in a new context.

12 years ago, Anne Sofie von Otter recorded two numbers from Fantasiofor her wonderful Offenbach album on Deutsche Grammophon. I remember thinking, back then, how much I would love to hear a complete score after von Otter’s dazzling rendition of the ballad to the moon and a duett. What fascinating music!

It was only a question of time, I guess, till someone heard my prayers and answered them. Master of Offenbach reconstructions, Jean-Christophe Keck, had also taken interest in Fantasio. It was revived in October 2000 at the Opéra de Rennes in a version reassembled by him. The production by Vincent Vittoz toured to Tours, Nantes and Angers. The show was also performed at the summer festival of Opernbühne Bad Aibling in 2003.

And in December 2014 the opera house in Karlsruhe is giving “Fantasio” a big splashy new stage production too, sung in German.

Keck argues that one reason for the long neglect of Fantasio was that it has been difficult to locate a performing edition; only a vocal score was published at the time of the premiere, along with a “corrupt” and re-orchestrated German version.

Keck went back to the first Parisian version from 1872. His re-assembled score was performed live in December 2013 London, in a concert organized by Opera Rara. They then sent their team into the studio and recored the show. Just in time for christmas, the label released the double CD. And makes Fantasio available for all the world to hear.

The story, in a nut shell, is this: to be close to his love, Princess Elsbeth, the young Munich student Fantasio dresses up as a court jester and enters the palace. En passant he stops the war with Mantua (on the other side of the Bavarian Alps), a deed for which he is given a royal title in the end.

Sarah Connolly is a warm, melancholic and at times decisive Fantasio. Not particularly “Bavarian,” nor typically French. But a joy to listen to. As her Elsbeth, Opera Rara could not have chosen a more beautiful soprano voice than Brenda Rae. In their big duet, the voices melt into one, caress one another and glow next to each other. It is breathtakingly beautiful to listen to them!

All other soloists are also wonderful to listen to, I find, together with the great Opera Rara Chorus they are fabulously accompanied by Sir Marc Elder and the Orchestra of the Age of Enlightenment.

All of you who enjoyed L’Etoile at De Nationale Opera in Amsterdam recently: listen to the numer “Quand l’ombre des arbres,” that starts with the chorus and is followed by Elsbeth’s aria “Cachons l’ennui” at the start of act 2. You’ll realize where most of Chabrier’s great ideas come from. For operetta and Offenbach fans, this double CD is a must have.