One evening in the summer of 1942 in Częstochowa… 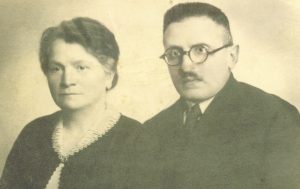 the whole family including ‘Auntie’ Helena (my nanny had gone home by then) gathered around me to ask a question. With whom would I rather go to be delivered to my parents: Auntie Helena or my nanny? It was clear, I wanted my nanny, but what six year-old could look Auntie Helena in the eyes and say he preferred the other? The conversation continued.

“Granny, why don’t you come with me, I would love it so much?”

”I can’t. Grandpa has a long nose they would recognize him immediately as a Jew.”

”Then leave him here and come with me. Please!”

With Auntie Helena we took a train to Warsaw. I was told to pretend I was deaf and mute, and not to speak to anybody under any circumstances, my accent would betray me. And so I spent two hours glued to the window. Auntie Helena, in her own peasant singsong that she retained forever was chatting for these two hours with all the female occupants in the carriage. We then changed to a narrow gauge suburban train to Wawer, then a small village where my parents took shelter.

This was in July, and afterward as a grown up I learned that two months later on September 22, 1942 the Częstochowa ghetto was liquidated. My four grandparents all were sent to the gas chambers in Treblinka independently of the length of their noses.