From France to home in Israel Dr. Ida Akerman-Tieder’s chronicle of survival and celebration of life

THE FIRST time I met with Ida Akerman–Tieder, it was in the quiet Jerusalem street where she lived. She had placed a hanukkiah outside her apartment as required by Orthodox tradition, and she had just lit the first Hanukkah candle. And I said amen.

Emboldened by the festive and mysterious quality of the Jewish festival, I introduced myself to a charming lady in her 80s. Chance had it that I had just finished reading her memoir, And You Shall Tell Your Children: A Chronicle of Survival – Lessons of Life for Today. I was impressed by the pediatrician and captivated by the psycho analyst. That evening in December 2011 I tried to discover the mystic side of the poet in her, and her reasons for celebrating life the way she did, against all odds.

Born in Berlin in 1927, Akerman–Tied er is the granddaughter of a rabbi, and the daughter of a man versed in Talmudic studies who became a tradesman, and of a woman who transmitted Judaism to her children through the observance of Jewish rites joy fully celebrated in a loving home.

Akerman–Tieder had managed to flee from Berlin to Belgium in 1938 with her parents, brother and sister, and then to France in 1940 ás refugees with the beginning of the war. The whole family was interned in the French internment camp of Agde where starving men, women and children were separated and kept in inhumane conditions. In the sordid barracks they suffered from the cold, the presence of rats, lice, the lack of water, and sexual abuse. She recalled how even pregnant women were beaten up by the French “gendarmes” (police guards), and that there were no restrooms or showers. She escaped miraculously from this camp while her mother was meant to go to a hospital and come back in the evening. Later on, she learned French, but felt terribly hurt by the French population indifference to the suffering of the Jews and by the cruelty of the Vichy administration.

When her parents were deported, her father sent his children a last message and instruction from the train on the way to Auschwitz: “Never rebel against God, keep Shabbat, and be good to one another.”

After the arrest of her parents, Ida had suddenly become an orphan at 14. She miraculously escaped the roundup of Au– gust 26, 1942 in the southern part of „free” France. After wandering from place to place for three months without any news of her family, she joined her brother and sister who had already found refuge in the Moissac children’s home. The place was admirably run by the Eclaireurs Israélites de France (The Jewish Scouts of France).

After the war, from 1950 to 1963, Ida studied medicine in Paris, obtained good grades and married a fellow student who later became a noted neurologist and head– ed the department of nuclear medicine at the famous Parisian Foch Hospital.

Akerman–Tieder was also a respected pediatrician and psychoanalysis in France  when in 1990, the couple immigrated to Israel to join her three children. 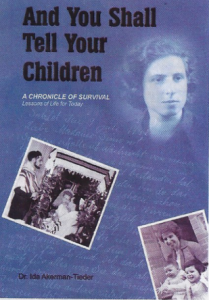 In her book, Akerman–Tieder expresses and analyzes some of her traumatic memories. “After the war, our parents never returned from the deportation. All the children who were hidden, away from their families and deprived of their identities and familiar surroundings, came back to Moissac.”

It was a time when returning deportees were warmly welcomed and perceived as heroes if they had been resistance fighters. It was then that Ida Tieder felt as if they were the “children of silence,” those nobody ever spoke about even though they had made it through the war without their parents.

In the aftermath of the war Moissac was a place that enabled children to renew their lives. It also became a sort of cultural and intellectual center where many Jewish intellectuals were invited to lecture on Jewish  philosophy. The Jewish Scouts’ children’s she registered for a course of literature at home was the starting point of a postwar the University of Toulouse, while waiting Jewish identity based on Torah.

to obtain the French naturalization papers, This atmosphere, which she enjoyed until which she had requested. the age of 18, helped Akerman–Tieder be– Her sister and brother were also encoun gin again. While studying, she also taught tering similar difficulties at the same time. school children at Moissac, but adapting to In France, children of deportees who were daily life was still difficult without parents. not French were considered as war orphans Throwing herself into her studies was the and as such could receive small scholar thing that mattered most to her. She relates ships. later in her memoir her interview with the Eager to study, Akerman–Tieder finished head of pediatrics at the hospital where she her medical studies in brilliant fashion, worked:

promising to make children smile again. “When I worked in Doctor Brissaud’s She emphasized that she married Fred department for children with meningitis Akerman, a young man born in Berlin caused by tuberculosis, I arrived before the who happened to attend the same medical procession of doctors and I made the chil– school she attended but whom she met by dren laugh because I couldn’t bear to see chance on a boat bound for Israel in 1953. their sadness. One day, he arrived earlier . Although Akerman–Tieder soon gave than usual and saw me. He remained be– birth to three children, she went on to study hind the door, not wanting to disturb me. for her specialization in pediatrics and, lat He called me to his office and asked me, er on, psychoanalysis. It was quite a chal What do you want to do?’ I answered, ’Pe– lenge but she yearned to help all those who diatrics, but there’s no way I can. I don’t suffered, and especially those who had en know anyone.’ In those days one couldn’t dured persecution during the war. expect to get a place as a non–resident Even though Akerman–Tieder and her student in a good pediatric service if one husband enjoyed prestigious jobs and so– didn’t have connections. The head immedi– cial status, she felt they lived in exile. ately gave me a word of introduction.” Unlike the word Diaspora, the term exile

This type of help was all the more ap– conveys a negative connotation which she preciated as even registering in a medical developed in her book. school had been by no means easy. Being In her opinion, the Jews of France whose a stateless person was an extra hurdle. She Judaism has to remain in the private sphere explains the complex situation she had suffer from a form of „split personality.” faced:

Conversely, “Identity Out in the Open” (a “I was supposed to be Czech, my father chapter title of her memoir) is what she ex– being Czech as he was born in Czechoslo– perienced when on Israeli soil, pointing in– vakia, a country bordering on Hungary and directly to the uncomfortable double identi– Poland. But the Czechoslovakian consulate ty of some Jews in exile. did not recognize my right to their national– Before making aliyah Akerman–Tieder ity.... I wasn’t French either, and the French had visited the Jewish state many times. didn’t want to give me the identification One of her poems written in French titled document of a stateless person since I was „Fifty Years After” illustrates to what ex– a Czechoslovakian.”

tent living in the Land of Israel was a dream One of the educators of Moissac went to that came true: „Fifty years after the war / the consulate in Marseilles on her behalf We’ve had the good fortune of having re to declare that she renounced her previ– turned to our Land.” ous nationality in order to obtain the green In a chapter she titled „Back in Our Ele– identification paper of a stateless person ment,” she wrote about their planned emi– But when she began studying medicine, gration: „This project preoccupied us. We’d the Ordre des Médecins (Board of Physi– made many journeys to Israel, and aliyah cians) was opposed to the idea of granting seemed to us the culmination of our path, citizenship to foreign medical students. So the concretization of our Jewish identity,  a way of showing ourselves to be fully fledged members of our people in our land, claiming our collective heritage without having to be pigeonholed as dati or „reli gious,” terms which don’t always fit me.”

Akerman–Tieder’s three children all live in Israel today and share the same Ortho doxy as her, the same spiritual energy, transmitted in turn to their own children. Akerman–Tieder is a happy grandmother and great–grandmother whose transmission of her past has been achieved through her memoirs, which she has had translated into both English and Hebrew, the language of her grandchildren.

Akerman–Tieder’s religious background and evolution has definitely played a part in her reconstruction and in the narrative she presented in her memoir, focusing on the depths of the „Jewish soul” and the logical move to Israel as her final home.