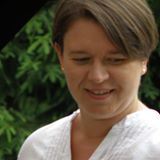 Recognized as the Righteous Among the Nations:

Help Was Extended to:

Before the outbreak of the WWII, Wanda Makuch studied medicine and was an instructor of military training courses for women. During the German occupation, she continued hereducation at the underground University of Warsaw. She was also associated with the Military Service of Women of the Union of Armed Struggle, later the Home Army. As part of her apprenticeship, she worked in several Warsaw hospitals. Contacts with those institutions enabled her to help Jews hiding on the “Aryan side”. She organised for them, among other things, medical appointments with trusted doctors.

Wanda met Halina Walfisz in 1938. When the ghetto was created Halina was in a group of women working in sheds on Ogrodowa Street. The workers came out of the ghetto every day to work. Wanda used this opportunity to get in touch with Halina and persuade her to escape. She agreed with her colleague, who owned a pharmaceutical factory near Warsaw, HenryKlawe, that he would accept Halina to work, register her in his house and arrange a flat for her. Wanda got a necessary identity card under a false name Elżbieta Staniszewska with help of her supervisor Maria Tyszkiewicz from the Military Service of Women. Thanks to this document Halina could live in Warsaw together with her friend Chaja (Niuta) Gutkowska.

Wanda also helped lawyer Marian Huskowski who after leaving the ghetto was hiding for a few days in the Department of Pathological Anatomy on Oczki Street. This was possible thanks to the decision of the then manager of Wanda, Dr Wacław Lewiński. Wanda provided Marian with a false identity card as well as gave him a lesson of proper Polish pronunciation. One day Huskowski left his hiding-place to meet his cousin who had arrived from Vienna. Then he was arrested.

Marian Huskowski’s sister – Kazia – worked and lived with a higher school advisor named Koch, looking after his children. However, for fear of being recognised, she did not moving away from her place of residence near Rozbrat Street. From time to time she needed help in the organisation of transport of her things from different places in Warsaw and, above all, she wanted to see her son Jurek who was hidden in a Polish family in a flat on Chlodna Street. Wanda organised those meetings to which she brought the boy herself. They were usually held every two-three weeks in the Department of Pathological Anatomy of the UjazdowskiHospital in the afternoon.

When the uprising broke out in Warsaw, Kazia was left alone with Wanda’s mother – HelenaMakuchowa – in their house on Aleje Jerozolimskie Street. She took care of her until the expulsion of the civilian population from the city. Before leaving Kazia gave Helena her valuables and instead of going to a camp, she went towards Rozbrat Street. Thanks to Wanda’s efforts, they managed to recover the valuables after the war. Kazia wrote letters to Wanda until her death.

Wanda took part in the Warsaw Uprising as a nurse of the 3rd Circuit “Waligóra” in the Hospital of Karol and Maria Szlenkierów on Leszno Street 136.

After the war, she worked as a neurologist of the Department of Neurology of the Medical Academy of Warsaw and a confidence doctor of the American Embassy in Poland.