Charles Aznavour and His Family Saved Jews during the Holocaust

They hid a number of Jews in the Paris apartment, at great risk to their lives.

Charles Aznavour, 92, is a towering figure in French music. For generations, his magnificent voice and sensitive singing have made him one of the most popular French entertainers of all time.

Some of Aznavour’s many fans might be forgiven for thinking the singer is Jewish. He has appeared in French films over the years playing Jewish characters, and his version of the Yiddish song La Yiddishe Mama has been one of his enduring hits. His haunting 2011 song J’ai Connu, “I Knew”, is told from the perspective of a Jew imprisoned in a Nazi concentration camp. Aznavour has performed repeatedly in Israel, most recently in October 2017.

On this most recent visit to the Jewish state, Mr. Aznavour met with Israel’s President Reuven Rivlin who bestowed on Mr. Aznavour and his sister Aida the Raoul Wallenberg Medal, given by the International Raoul Wallenberg Foundation, in recognition of the Aznavour family for saving the lives of several Jews and others during World War II.

Aznavour, the son of parents who fled the Armenian Genocide in Turkey of 1915-1918 to find safety in Paris, has previously said little about his parents’ heroic wartime activities.

That changed in 2016. Aznavour worked with Israeli researcher Dr. Yair Auron to write a Hebrew language book published in Israel that details the ways his family saved the lives of several people in wartime France. The book, titled Matzilim Tzadikim V’Lohamim, or “Righteous Saviors and Fighters” in English, will be translated into French and Armenian, too.

“We grew up together in the Les Marais district” in Paris, Aznavour recalls, where many immigrants mingled together, including both Jews and Armenian refugees. “They were our neighbors and friends.” By the time World War II broke out, a then-teenage Charles Aznavour lived with his parents Michael and Knar Aznavour and his sister Aida at 22 Rue de Navarin, in Paris’ 9th Arrondissement. That small, three-room apartment would become a safe haven, Aznavour explained, for Jews and others who were hunted by the Nazis. 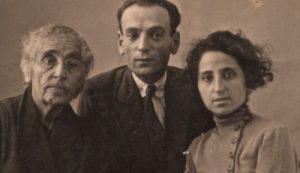 A portrait photograph of the Aznavour family in the 1920s. Charles’ father, Mischa (center), is next to his wife, Knar.

The first person the Aznavour family sheltered was a Romanian Jew who lived in Germany. That Jew, whose name the singer no longer remembers, was accused of subversion and had been sentenced to death. He’d escaped to France disguised as a German soldier, but had been discovered and he was being hunted by the Gestapo. A friend alerted Michael Aznavour of the situation and the family took him in.

Aida Aznavour recalls in the book, “We understood that the Jews were going to be the victims of brutality. We looked upon the Jews with sadness and sorrow.” Having escaped persecution in Armenia, “we knew what genocide was.”

It was clear that if the Nazis found this man in our house, they’d kill us right away.

She recalls that her parents never hesitated to shelter Jews, “even though it was clear that if the Nazis found this man in our house, they’d kill us right away. We told him that our home was his home, and we treated him warmly, like a good friend who had to extend his stay. For a few days, he even slept in the same bed as Charles.”

Later, a female acquaintance of the Aznavours asked them to hide her Jewish husband, whose name Charles and Aida recall was Simon. Simon had been rounded up with other Parisian Jews and sent to the Drancy concentration camp, but he had escaped. The Aznavours took him in, and later on, Charles and Aida recall, they sheltered a third Jew in their tiny apartment, as well.

As the occupation of Paris continued, the Aznavour family also sheltered Armenian soldiers who’d been forcibly drafted into the German army and had deserted rather than fight for the Nazi regime. At times, there were up to eleven refugees hiding in the family apartment, sleeping on the floor at night.

Michael and Knar Aznavour helped the refugees obtain false papers, and Charles and Aida offered aid as well. It was the teenagers’ job to burn the Nazi uniforms of the Armenian deserters and dispose of the ashes far from home, the siblings recall.

The Aznavour family was close with another Armenian couple living in Paris, Melinee and Missak Manouchian, who helped found and run an underground resistance movement in Paris called L’Affiche Rouge(The Red Poster). Charles Aznavour explains that though his parents were not formally members of the group, they helped members of the organization and even hid Melinee and Missak Manouchian for several months while they were hunted by the Gestapo, after their other friends refused to risk their lives to help.

Charles Aznavour explains, “My parents knew the danger was there every day, but my sister and I only grasped it later. We were ‘crazy’ young people. We were living out our youth and we followed in our parents’ footsteps. Only after the war did we realize how great the risk really was.”