For me, the fact that Michael Fabiano was going to make it was indisputable. From the very first time I saw and heard him, in the highly recommended documentary The Audition, I knew for sure, the winner had arrived. That year (2007) the competition was extremely strong, with Jamie Barton, Angela Meade and Alek Shrader among the finalists. To stand out in that company you had to be really special and Fabiano certainly was. 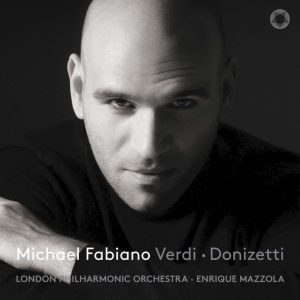 The young tenor, then only 22, who so fiercely contended all his opponents, not only showed himself to be extremely talented, but in his self-confident attitude and urge to win also a fighter a stayer. I wasn’t mistaken and now, twelve years later, Fabiano is one of the biggest tenors in the world. He has now released his first solo CD, for the Dutch record label Pentatone.

It is a dream of a recital, not only for the gorgeous voice of Fabiano (and the beautiful accompaniment of the London Philharmonic Orchestra conducted by Enrique Mazzola), but also for his choice of repertoire.

Fabiano chose arias that link Donizetti’s gradually maturing and developing belcanto (from Lucia, via Poliuto to Maria di Rohan) directly to Verdi’s early operas. In doing so (hurrah, hurrah!) he has often opted for the original versions of the arias. For instance, he sings ‘Qual sangue sparsi,’ the tenor aria from the original Saint-Petersburg version of La Forza del Destino.

Already in the first aria from Luisa Miller he totally has me in his power: his diminuendo! My God! Enough to stop the heart of any opera lover. There is a single mishap: ‘La donna é mobile’ (Rigoletto). Not that he sings it badly, although I think he has outgrown the Duke already. It’s just that it’ s superfluous.