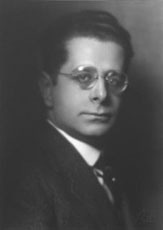 “In comparison with all of these other would-be Mahlerians, Wilhelm Grosz rises far above and is already much more established.”

Thus wrote the critic Julius Korngold in April 1924 when he compared various Viennese composers conspicuously demonstrating their Mahler credentials in their own works. If Wilhelm Grosz, (1894-1939),is remembered today, it’s probably for his London ‘Tin-Pan Alley’ songs, Isle of Capri, Red Sails in the Sunset, When Budapest was Young and Harbour Lights written under the name of Will Gross or Hugh Williams. One could even credit him with composing the first ‘Country Western’ hit with his song Along The Santa Fe Trail, intended but never used for the 1940’s film The Santa Fe Trail with Olivia de Havilland and Errol Flynn and a young unknown Ronald Reagan in a secondary role.
Caly wpis i muzyke znajdzisz jak