I’m happy to share that American Muslim will be having its New York City premiere as part of DOC NYC, the country’s largest documentary film festival. The screenings will be on Sunday November 10 and Tuesday Nov 12. I’m very pleased to be a part of the lineup—for a story which takes place in Queens and

Brooklyn it will be great to bring it back home! And I’ll be joined by a number of the principal players in the film, which will be very special. Also pleased with the film’s inclusion in The Arab Film Festival, the largest such event in the country. It’s an honor to be one of the very few American-based stories programmed there.

Additionally, while the film continues with its festival run, I’m initiating an effort I’m really enthusiastic about — The American Muslim Interfaith Project. The impact campaign builds upon the movie’s theme of interfaith alliance in bringing together synagogues, churches and mosques, JCCs/MCCs, and Hillels/MSAs for joint screenings. This will be followed by facilitated discussions led by speakers from each community, and then food and socializing. I’m partnering with religious and interfaith groups across the country, and am incredibly excited to have the film seen in these settings.

If you’re a member of a faith group, or are interested in getting your local community group to participate, have them contact me (or contact me yourself). I’m looking to work with people on the ground, in the community, and eager for your ideas and relationships. 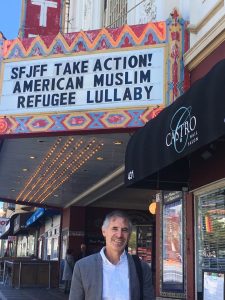 In July the film premiered at the Castro Theater as part of the San Francisco Jewish Film Festival. Love that marquee!
American Muslim explores being Muslim in the Age of Trump by following five diverse Muslim-Americans in my hometown—New York City— from the issuance of the Muslim ban in January, 2017 to the Supreme Court’s decision on that ban in June, 2018. It tracks the rise in Islamophobia in the Trump era and the community’s political mobilization, but it’s also an intimate look at five people who I’m now honored to call my friends.

There are many more events upcoming this fall and winter, in New York and around the country. Here’s an early write-up of the film, much more will be coming out soon. Continue checking in at the website or follow it on Facebook to stay abreast of what’s going on.

There’s been great interest in the film’s story at this unique point in time, and I’m happy to add American Muslim’s voice to a much needed conversation. Hoping to do so at a place near you soon.