„Bloom where you are planted”

A stroll down memory lane

I am inviting all of you for a stroll down my Memory Lane. Sip your coffee; enjoy your tea and wander with me. I will take you to Warsaw, Paris and Princeton to illustrate my treasured holidays, and events, and their impact on my life.

My first “December to Remember” was in Wałbrzych after the war. Ruins and a sea of tears. Main Dish – bread and canned mackerels .I was not happy with my first gift – a doll head. No legs, no hands, no body. I worried about this head. Everybody was talking about Adolph Hitler. I feared that the rest of the doll was still with him. I forgot about problems with my doll to be, when my father proudly put on the table a wooden box. A woman hidden inside was singing and talking. I did not understand why my parents, and all their guests were so happy looking at this wooden box. Why they didn’t invite this singing woman to be with us. How was she breathing? I did not want to disturb my parents, and I was patiently waiting for them to leave the apartment with their guests. It was a custom to walk guests to the bus after visiting…

My tools were prepared ahead of time. Amazingly, I also heard other people inside the box talking and singing and I promised all of them their freedom. After I broke the box my parents came back and I was very happy to let them

know my intentions. They were very sad saying “you broke our first radio and we don’t have money to replace it”, but you are right people should be free, and one day you will understand that their voices were recorded and no one put them inside our wooden box. Many years later, when I was already in college, and we got our first black and white TV, I said to a crowd of people sitting in front of our huge wooden box with a very small screen: “Do you remember me saying that inside of the wooden box were people . Guess what… you are looking at them.” 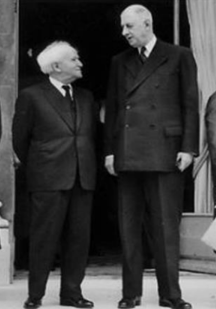 It was a spectacular gala in a prominent Warsaw’s Great Theater in honor of the President of France – General Charles de Gaulle. After a magnificent performance, the audience was patiently awaiting the appearance of the French President alongside the President of Poland surrounded by distinguished public figures. I was very proud to be among the audience up to the moment when I noticed that General Charles de Gaulle was descending the spacious, granite stairs heading toward me. “Is it a figment of my imagination?” I asked myself.

It wasn’t. Charles de Gaulle – the President of France was in front of me with his two hands holding mine. I had no doubt that this was a difficult to explain mistake, but I couldn’t stop the President of Poland and other dignitaries from squeezing my hand in the next few minutes. And photographers and TV cameras. Yes, I was famous.

A few days later I understood why I was so honored. I was very pregnant, and one week after the gala my son was born. No, I did not name my newborn SON after the French President, but I was often thinking about my minutes of FAME, and the remarkable manners of the French President who approached me because I was the only pregnant woman in the awaiting him crowd.

I don’t have to tell you that the first steps in a new country are really difficult. However , not everything is serious, some events are humorous. Listen what happened to me. I just arrived to Princeton from Paris. After a few days I started attending my first English class at the YMCA. All these new words were ringing in my ears. I couldn’t memorize them. My job interview for a position at Chemistry Department at the Princeton University was in German. My future boss didn’t know French, and I didn’t know English. Everything was as expected – very complicated. I started working one week after our German interview , and the same day they invited me to a holiday party. I had no intention to go, but my boss was determined to convince me. My English teacher at the YMCA was very persuading also saying that I shouldn’t worry because usually during any party at work women talk primarily about cookies. They exchange recipes, discuss the best ingredients etc.

I had enough time to start preparing for this important event. I decided to make a list of cookies and memorize their names. Most of the cookies are described by 7 to 10 words. Words unknown to me. Chocolate chunk cookies with pecans, dried apricots and tart cherries Jose’s of Boston chewy oatmeal peanut butter chocolate chip cookie. 100 percent whole wheat Granny’s Old fashion Sugar Cookies. I memorized, translated and memorized and memorized again. And the day came. I was standing at the corner of a very big room, and I had only one wish – to stand alone, but people were surrounding me, and I was smiling. Suddenly a large group of people was heading toward us , corner crowd and one woman carried a huge tray of cookies. I remembered only “Word War II Raisins Squares”. I experienced a total memory crash. They were saying something, and I heard my familiar word – COOKIE. I decided not to take any cookie and I said a few times NO, THANK YOU. Everybody looked at me very confused. I had no idea what was going on. After a minute or two I called my son, and he translated. They were saying “We would like to introduce Mrs. Cookie, and you responded “No, Thank You” I Hate Cookies

Poprzednie wpisy z seri  „Bloom where you are planted”